Quick Description = Clicks as a percentage of Impressions

Referred to as = CTR

This describes the relationship of Clicks to Impressions and is calculated like this:

Below we have listed some important features, behaviour, and information on CTR below:

Although calculated the same way on either the Search or Display Network, average Click Through Rates will typically be very different due to the nature of the way in which ads are served to users. The Search network will be more likely to see CTR range between 3% to 5% for relevant non-brand terms, whereas the Display network typically see CTR well below 1% (between 0.05% to 0.2%).

CTR can vary wildly between keywords, campaigns and accounts depending on a huge range of factors but the Display network has a characteristically lower CTR than the Search network. The vastly higher volumes of Impressions the Display network receive balances out the low CTR.

Aggregating CTR across to many campaigns, networks, devices, products, ad groups, etc can ultimately lead to a less useful metric. Where CTR intrinsically differs such as between devices (mobile and desktop) and networks, there is often no reason to aggregate CTR in this way.

CTR is best looked at when you have segmented data by both network, device and brand vs. Non-brand campaigns. Due to large variations between CTR across these segments will result in a metric irrelevant to all segments.

We would also advise that you consider how much data your CTR is based on; on the search network we would consider anything less than 100 impressions as not enough data to make a decision or access performance. Ideally, we like to see a minimum of 500 impressions when split testing ads but anything over 1,000 impressions would be ideal.

The Display network typically has much lower CTR and consequently we would look to increase the numbers for Search by a factor of 50, so:

The table below shows multiple combinations of the above impressions and common CTR on the display network. This should provide some idea of how many impressions you need at these CTR’s to get just some clicks: 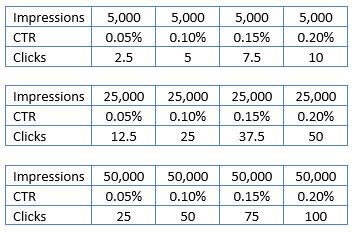 What is a Good CTR?

This is an age-old question and one without a straight answer unfortunately. Different industries have huge differences in CTR, meaning that you will need to find a study relevant to the industry you operate in to find some meaningful comparison data.

CTR on its own shows very little, 100% CTR of 3 impressions isn’t as useful as 10% CTR from 1,000 impressions! So, you may also be interested in the following guides that describe metrics relevant to CTR: