If you are not familiar with keywords, we suggest you read our guide on them before reading this.

Negative keywords prevent ads from triggering when the negative keyword matches (based on match type) a search term that would otherwise have triggered one of your ads.

Negative keywords reduce Impressions by restricting when or where your ads can show, depending on what network they are being used on.

Why Use Negative Keywords?

Using negative keywords helps to improve CTR through reducing the number of impressions, which has a desirable impact on things like Quality Score, which affect overall account performance. More than simply improving other metrics, they also help to limit the triggering of your ads to only those searches that are relevant to your keywords.

For people new to AdWords; Google set the default match type of keywords to ‘broad match’ and this is often not changed to a more appropriate match type. Consequently in this scenario, a range of low relevance to irrelevant search terms will be triggering ads. This can still result in Clicks that you pay for, which often result in poor engagement and conversion rates.

The only scenario where not using negative keywords would be appropriate would be in accounts, which use only Exact Match Keywords on the Search Network.

Components of a Negative Keyword

Unlike ‘keywords’, negative keywords have very few components and attributes as they perform a singular function in a simple way.

This is the negative keyword itself, so if you wanted to add the word ‘blue dresses’ you would enter “blue dresses” into this field:

We discuss this in more detail in the section below, but all negative keywords have a match type.

Negative keywords can be either enabled or removed. Once removed, they still show in the account but with a strikethrough line and appear greyed out:

If removed, right clicking on it in AdWords Editor and selecting “revert” from the menu will enable a negative keyword.

Negative keywords are most commonly used in Search campaigns but they can also be used in Display campaigns. Below, we discuss how usage on the two networks differs.

On the search network negative keywords prevent ads from being triggered (based on match type) when they are present in search terms.

A more common way of restricting ads once you have some data is to use negative placements.

These work in much the same way as keyword match types, but rather than triggering ads, they prevents ads from being triggered based on the match type. The concepts underpinning this are the same, Google needs to match a negative keyword to a search term and they provide several ways to go about facilitating this.

Exact match negative keywords prevent ads from triggering is someone searches for something (more or less) exactly as you have defined it. For example, if you add the keyword ‘blue dresses’ to an ad group, none of the ads will be triggered if someone searches for “blue dresses”. This will not include misspelling and pluralisation of the negative keyword.

Consequently this is a very limited restriction of ads, someone searching for ‘formal blue dresses’ would still allow an ad to be triggered in this example.

Brackets surround exact match negative keywords, this is done when uploading them, for example:

Negative keywords set to phrase match will typically prevent ads from being triggered more often than with exact match but less than with broad match. Because phrase match strikes a nice compromise between highly specific and very unspecific, they are very powerful and highly effective at limiting unwanted ad exposure.

This will not include misspelling and pluralisation of the negative keyword.

Unlike exact match negative keywords this would prevent ‘formal blue dresses’ from triggering an ad. Thus more caution is required, because adding a single word, as a negative keyword will prevent ads from showing if that word occurs anywhere within a search term.

Continuing the example, adding ‘blue dresses’ as a phrase match negative keyword would not prevent ads from triggering if someone searched for ‘blue formal dresses’.

This match type will not include misspelling and pluralisation of the negative keyword.

Broad match negative keywords do not use either brackets or quotation marks, but are uploaded ‘as is’.

This match type is unfortunately not currently available for negative keywords.

The default match type for negative keywords is broad match. 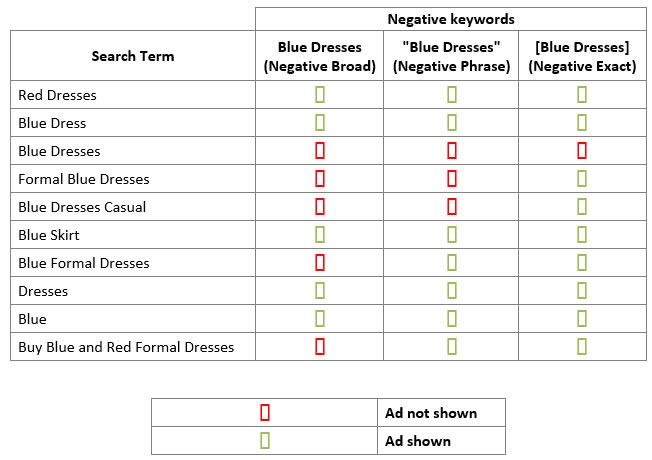 Ad Groups can have up to 20,000 targeting components (keyword, Placements and audience lists), Google don’t make it clear how many negative keywords can be added or if they included in this figure... We have tested this and found that we had no problem adding 10,000 negative keywords at the ad group level.

However, Google have provided us with the shared library and in that we find ‘negative keyword lists’.

These are only available online, so you cannot add or build them through AdWords Editor. These lists can hold more negative keywords, they can be applied to multiple campaigns, but more importantly campaigns can have multiple lists applied to them.

Adding negative keywords at campaign level is typically done when the negative keywords are not going to conflict with keywords in the campaign. For example adding “free” as a negative keyword to a Search Network campaign in order to prevent ads from being triggered by people using the word “free” in their search term is a commonplace tactic.

There are a lot of common keywords that get put into all campaigns (except exact match only campaigns) are things like:

This is far from a hard and fast rule, if you are managing the AdWords account for a recruiter, you will not want to go ahead and add “job”, “career”, “hire” etc as negative keywords!

It is very commonplace to add all of the keywords from other campaigns to a campaign (at campaign level), to prevent one search term from being able to trigger more than one ad from different campaigns. We discuss this strategy in more detail in a guide on account structure, as this is pivotal to how accounts are structured.

Adding negative keywords at the ad group level is often more specific, adding terms that are relevant only to the keywords in that ad group. For example if you have a campaign that advertises your range of dresses, you may have ad groups to target the following terms and variations thereof:

If each of the above represents an ad group containing a handful of closely related keywords, you may want to limit the triggering of ads at ad group level to force the most relevant ad to show. For example, adding the negative keyword “blue” to the ‘red dresses’ ad group would prevent the ads in the ad group from being triggered when someone uses the word ‘blue’ within the search term.

You can probably see why this would not be appropriate to do at campaign level, because ads in the ad group containing the keywords related to ‘blue dresses’ would be prevented from being shown.

To find out how to add negative keywords to AdWords, please follow the link.